For the longest time possible I was suffering from constant bouts of bad breath through my early 20's.

To be honest it was mostly my fault because I never gave any real consideration to my teeth and now in my 26 years of being on this planet, I am regretting it massively.

I mean sure I have fixed my bad breath problem by utilising the products and methods outlined below, but there are other things such as yellow teeth and crookedness that I also need to sort out.

More on that in another article.

Right now is all about bad breath and how to overcome it!

So below I have made a list of the best mouthwashes for halitosis (including my favourite and best choice).

If your suffering from bad breath then I suggest you stick around and take in all the information.

How To Choose A Mouthwash?

There are a couple of important factors when it comes to choosing the right type of mouthwash for your bad breath:

The popular name brand mouthwashes are something I avoid completely now because they contain alcohol and although it does destroy bacteria lurking in the mouth it also causes the mouth to become dry very, fast.

This is actually bad because dry mouth can cause the breath to smell worse.

And when I said it removes all bacteria, I really did mean all of them. The bad ones but also the good ones, and that's a problem because we need the good bacteria in our mouth to keep the natural flora in balance.

I only use mouthwash that contains natural ingredients such as:

The American Dental Association (ADA) is a governing body which oversees and makes sure products go through testing before they are brought onto the market.

If your bottle of mouthwash has this seal on it then it's a good sign. However not every mouthwash will have this, especially if you are going to use a natural mouthwash like me. 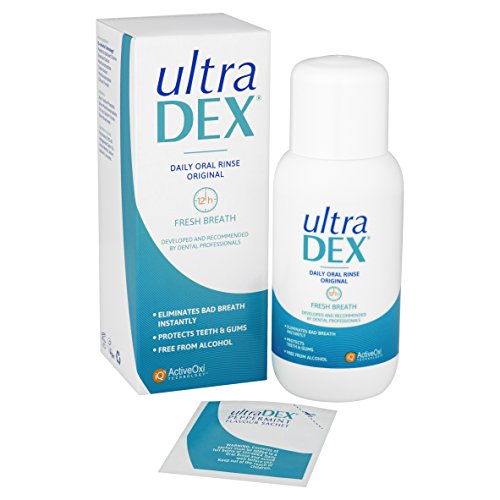 Well that's what it claims anyway.

It doesn't contain any alcohol or chlorohexadine which is a big plus as these chemicals are known to dry the mouth out completely which contributes to bad breath.

Apparently it also helps to restore the teeth's natural whiteness which I think is not true. It does not have any hydrogen or carbamide peroxide to whiten even slightly. If you are buying this mouthwash to get whiter teeth you are throwing your money down the drain.

Another odd thing I found is that it comes unflavoured but they provide you with a mint sachet to add if you can't bear the bitter taste. I don't know about you but I like having some minty flavour pre added in my mouthwash as it adds to the freshness of the mouth.

Apart from those 2 issues, this mouthwash is pretty good for keeping your breath fresh for long periods of time. It says upto 12 hours which could be true but I suspect you would have to use it 2 times in that period.

It also has this unique technology called: Active Oxi. This basically works with your natural oral pH, releasing just the right amount of active ingredient your mouth needs to ensure it stays fresh, clean and healthy all day long.

The cost isn't too bad either which makes this a solid product that you should try atleast once to see how well it works for you. 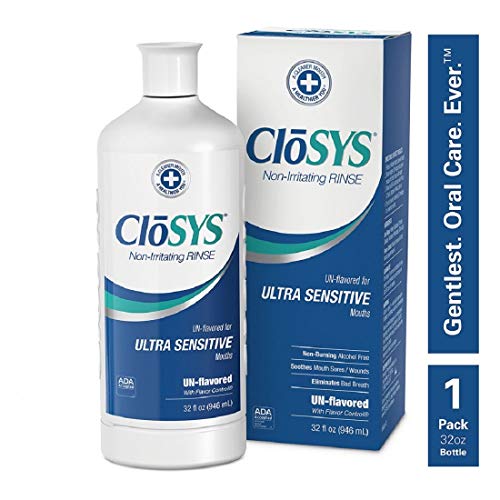 The closys mouthwash has 2 main benefits, keeping the mouth fresh and removing any sensitivities you may have around your gums and teeth. Similar to ultradex it targets the bacteria that release sulfur compounds to help get rid of bad breath.

The unique formula of Closys is called coralstan. This technology destroys the chemical compounds that create the bad smell as well as killing the germs that cause oral health problems.

The active ingredient is chlorine dioxide which sounds dangerous but the company say it's completely safe. It's been approved by the World Health Organisation and the US Food and Drug Administration.

The only negative thing to mention here is that this mouthwash is unflavoured and tastes slightly metallic. There is the option to go for the flavoured version but it's more expensive.

You can if you want, get a peppermint flavour dropper to add to the mouthwash to make it more bearable.

The closys mouthwash is more expensive than the more typical mainstream versions but I believe it does a better job than them. It's also a 2 in 1 formula, meaning not only do you get the fresh breath benefits but your sensitivity will decrease too.

Not a bad thing in my humble opinion 🙂

This mouthwash is mainly aimed at people who have a dry mouth but if you read what I mentioned above, you would know that dry mouth can cause some really bad breath. I notice this myself, when I haven't had anything to eat or drink for a good few hours, my breath reeks.

ACT is powerful and the number 1 dentist recommended fluoride brand currently available. It's alcohol free and has the following main benefits:

Unlike the other two mouthwashes I have mentioned, this one actually comes with a nice minty flavour. You won't need the additional step of having to add a sachet or a flavoured dropper.

It's less expensive than Closys and I believe it will do a slightly better job at keeping your breath fresh for longer periods.

If you suffer from dry mouth and have bad breath, this mouthwash is just for you. The healthy mouth blend is not technically a mouthwash as it has multiple uses. It's on the list because I have been using this to clean my teeth for the past 6 months or so and It has helped me tremendously.

It's basically an oil based solution that contains various different natural oils such as:

It's a completely natural remedy for gum disease (gingivitis) and I can say with confidence it has helped my gums become stronger and they don't bleed (for the most part).

Because it's natural, there are no nasty chemicals to worry about and it tastes good too with the spearmint and peppermint oils in there.

Now you might be thinking why the hell is this on the list if it's not a mouthwash.

You can turn it into a mouth rinse by placing 2-4 drops in a small amount of water and swishing for 1-2 minutes to reduce the bad bugs in the mouth, freshen the breath AND increase saliva production all at the same time.

For me personally, I got the best results when I used it simply as a toothpaste and brushing it onto my teeth. You can visit the full review of the healthy mouth blend if you want more information on it. 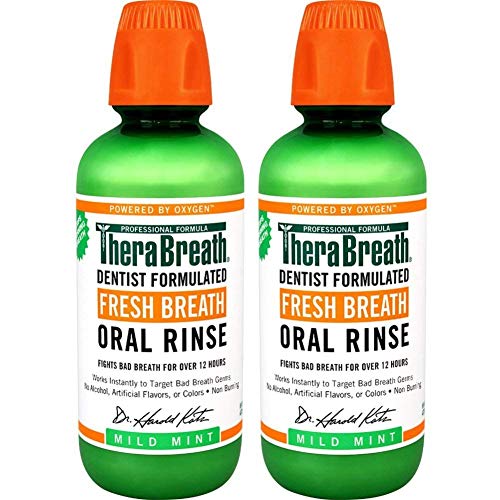 This is number 1 on my list because it's sole purpose is to eradicate halitosis, which it does really well. It was created by a dentist named Harold Katz who is an internationally recognised expert in the field of bad breath, taste disorders, tonsil stones and dry mouth.

He's appeared on many TV shows in America and through this he's helped millions of people with their breath issues.

The products undergo regular third party trials to see the effectiveness of the product.

One experiment carried out at Princeton looked at how long a single use of the oral rinse could keep the mouth fresh. 63 test subjects were selected and they were split up into 3 different groups.

One was the test group, the other an untreated control test and the third being a positive control group.

It was concluded that for the test articles, the claims of "breath freshening" and "freshens breath for over 12 hours" were VALID!

The price of this mouthwash is on the higher end but it's still affordable and if your looking for a good solution to your bad breath then you should consider this product.

Other Things You Can Incorporate

A lot of people have been on the Oil Pulling band wagon for a while now and there must be something to it right?

Personally I have never tried this but apparently it's suppose to pull the toxins out from your mouth and into the oil which you spit out after 10-20 minutes of pulling. If it's true then it should make the mouth fresher because the sulfur producing bacteria would be eradicated.

For me though, something else has helped me 10 fold and that is: When I first found about this technique I didn't really give it that much attention because partly, I felt it didn't work. I was using a toothbrush tongue cleaner which didn't really scrape the tongue properly.

It was when I switched over to the metal tongue scraper that I saw results. The first time using the scraper I was amazed and disgusted at the same time. There was this thick yellow gunk just coming off the tongue and it smelled really bad.

After that session I felt really clean and fresh for the whole day. Tongue scraping has now become an important part of my routine.

I highly recommend you give it a try yourself alongside one of the mouthwashes I have talked about above.

If you have tried any of the mentioned mouthwashes please let me know your thoughts. Did it help with your breath?, how did it taste?, did you think it was cheap?

Primal life Organics has gone unnoticed in the mass health market but slowly and surely it’s becoming one of the go to places for Dental and skin health. It’s gonna explode soon! But enough of the story, let’s talk about the topic for today which is the whitening system they have recently come out with. On the surface… Your here because you want to learn more about the Snow Teeth Whitening Kit available in the UK. Well you landed on the right place as we are going to do a full review on this whitening kit and by the end of it, you will have a good idea as to whether it is something… Forget the conventional teeth whitening strips or the regular charcoal and baking soda hacks to brighten that smile. A new revolutionary technology is slowly gaining momentum and popularity among many users. Ever heard of the Snow Whitening kit? If you answered no then we’ll reveal all you need to know in this Snow Teeth Whitening… Looking for Philips Sonicare Flexcare Whitening Edition Review? If YES, you are at the right place! Image main This high technology electric toothbrush by Philips has more to offer than we understand. It is widely known for the following features: Brush Per Minute– The sonic technology produces 62,000 brush strokes so that the problem areas…